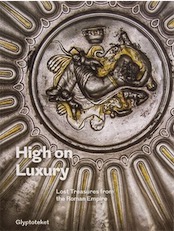 In 1830, near the village of Berthouville in France, a farmer discovered 25 kg of Roman silver service dating from the 1st – 3rd centuries AD. It had remained untouched for 1500 years. What was nearly miraculous was that the treasure had not then been scattered to the four winds, sold or melted down, but ended up in the Bibliotéque nationale de France. Today the treasure permits rare insight into life around a Roman temple. Together with other contemporary objects of great value from the Roman Empire it tells us about a life of decadence, but also reflects the cultural sophistication and intellect of Romans when conversation dealt with the motifs of the silverware – the Greek myths.
Référence : 52587. Anglais
•
39,00 €
Retour