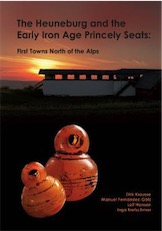 The Heuneburg on the Upper Danube is one of the best-studied sites of the European Iron Age. Recent research has radically changed our traditional understanding of this central place, which in the 6th century BC covered an area of about 100 hectares. As we argue in the book, the settlement can be classified as the first city north of the Alps. This volume has two main, interconnected aims: to provide the first synthesis in English on the archaeology of the Heuneburg and its surroundings, including the rich burial evidence and the hillforts in the vicinity; and to set the development of this important Early Iron Age site into the broader context of the centralisation and urbanisation processes of the Late Hallstatt period. The final chapter includes an overview of the main contemporaneous sites in Temperate Europe, from Bourges and Mont Lassois in France to Závist in the Czech Republic.
Référence : 51435. Anglais
•
49,00 €
Retour