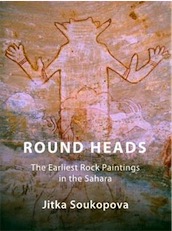 Round Heads. The Earliest Rock Paintings in the Sahara, 2012, -

The Central Sahara is considered the greatest “museum” of rock art in the world, containing several thousand prehistoric and recent images. The oldest paintings, called Round Heads, originated during a humid phase in the 10th millennium before present and they were created by dark-skinned hunter-gatherers living in the Algerian and Libyan mountains. Rock shelters show mainly anthropomorphic figures with body paintings and other embellishments testifying ancient rituals and ceremonies. Only two animal species – antelope and mouflon – appear to be as important as men and women; mixed with them on the same walls, these animals had a fundamental place in the ideology of the period. Since the discovery by Europeans in the 19th century, research in the Sahara has been scarce due to the difficult working conditions and to the problematic politics associated with national permissions. The rock art and the archaeology have always been treated as separated disciplines and only rarely were the paintings associated with a material culture. They have been described and classified but not interpreted because it was considered unachievable. Using interdisciplinary studies, this book approaches the previously neglected fields of the study of Saharan rock art, and it proposes new ways to research the art and the societies that created it.
Référence : 43456. Anglais
•
64,00 €
Retour