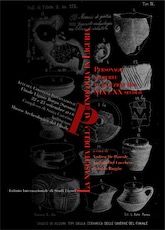 The book is in Italian and French with summaries in English and/or French. This volume sees the light in 2008, exactly a century away from the still today Arturo Issel work fundamental Liguria Preistorica (1908), which not only resume in a rich and caring summary all the knowledge available on Paletnologia (Prehistoric archaeology) of this region but, thanks to wealth of information and numerous citations and references, drew a first history of archaeological discipline for Ligurian area. This book, collects the papers presented to the International Congress (September 2006) “The Birth of Paletnologia in Liguria. Celebrities, discoveries and collections of nineteenth and twentieth century” held in Finale Ligure, in fact sweeps on a considerably wider than that suggested by the title. The topics are divided into three sections; also we have a in-depth, ranging from general problem of definition and placement of prehistoric research in the scientific culture of the second half of the nineteenth century (strongly marked by the work of Charles Darwin) to the specific local circumstances and protagonists of the birth of a new discipline in the northern Italian and French Riviera; up to the main theme, namely the reconstruction of the cultural and social context of the emergence Paletnologia in its Ligurian version.
Référence : 35269. Italien
•
70,00 €
Retour