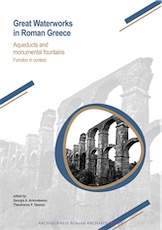 In recent years an increasing worldwide awareness of the importance of water management in the ancient civilizations has generated much new discussion on water archaeology in ancient Greece. The present volume, Great Waterworks in Roman Greece, consists the very first presentation of large scale waterworks in the Greek provinces of the Roman Empire. As a collective work, it brings together a wide body of experts from the newly emerged and expanding field of water technology and water archaeology in Roman Greece, and it fills an essential gap in archaeological research and relative bibliography regarding water management and monumental water structures in Greece during the Roman period. Among the main goals that this multi-author volume attempts to succeed is to show that great waterworks (namely aqueducts and nymphaea) not only were novelties in the Greek provinces, both in form and function, but they also changed the architectural landscape of their surrounding environments, and they introduced the concept of luxury in the urban landscapes of Roman Greece. The discussed papers deploy along a wide geographical area, covering the roman provinces of Macedonia and Thrace, Epirus, Achaia, the Aegean islands and Crete, between the 1st century BC and the 4th century AD. Collective studies such as this, not only will enlighten and promote the multifaceted significance of the archaeological remains regarding water management technology of the Roman period in the Greek regions, but they will also reveal the significant impact of the Roman technological heritage in the Greek territories.
Référence : 50287. English
•
49,00 €
Retour