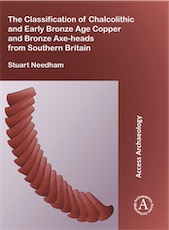 The Classification of Chalcolithic and Early Bronze Age Copper and Bronze Axe-heads from Southern Britain, 2017, 74 p. -

This work presents a comprehensive classification of the morphology of early metal age axe-heads, chisels and stakes from southern Britain. It is illustrated by a type series of 120 representative examples. Despite their relative simplicity, flat and early flanged axes from Britain and Ireland show considerable diversity in form. The main variation lies in outline shapes and the classification scheme arrived at therefore depends on careful evaluation of condition, followed by rigorous analysis of shape using metrical ratios. This ensures objectivity in both the formulation of the scheme and future object attributions, for which guidelines are given. Comparative material in northern Britain and Ireland is systematically referred to and a few crucial Continental parallels noted. Hoards and other associated finds, essential in underpinning the chronology, are cited throughout. The style sequence outlined spans nine centuries of evolution, a regional trajectory which was nevertheless inextricably tied to axe developments in northern Britain, Ireland and, to a lesser extent, the near Continent. While technological advance is apparent at the broad scale, this was not the sole driver of the style changes taking place. The study will be indispensable for those researching early metalwork, those concerned with European Chalcolithic and Early Bronze Age cultures and those interested in patterns of style-cum-technological development.
Référence : 49916. French
•
35,00 €
Retour