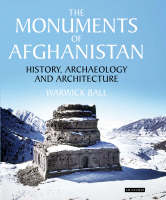 The Monuments of Afghanistan: History, Archaeology and Architecture, 2008, 288 p. -

No history of China, India, Persia or Russia can be fully understood without continual reference to central Asia. At the heart of the region lie the deserts and mountain range of Afghanistan that even today remain largely unexplored. Yet in the past Afghanistan saw the rise of great cities, empires and civilizations such as the Kushan in the first few centuries AD, the Ghaznavid in the 11th century, and the Timurid in the 15th. Despite bearing witness to ancient and more recent battles, the scarred landscape of Afghanistan is strewn with the monuments to illustrate this rich history: from the recently uncovered Ai Khanum in the north-east and the spectacular 12th century minarets at Jam in the mountains of the west, to the magnificent palatial complexes of the 11th century sultans at Lashkar Bazar in the south and what remains of the 5th and 7th century Buddhist world of Bamiyan in the Hindu Kush - notoriously destroyed by the Taliban in 2001. This book provides a general background to the history and cultural heritage of Afghanistan. It includes broad summaries of the history, architecture and archeology, together with a gazetteer of the main monuments and archeological sites.
Référence : 36093. English
•
117,00 €
Retour