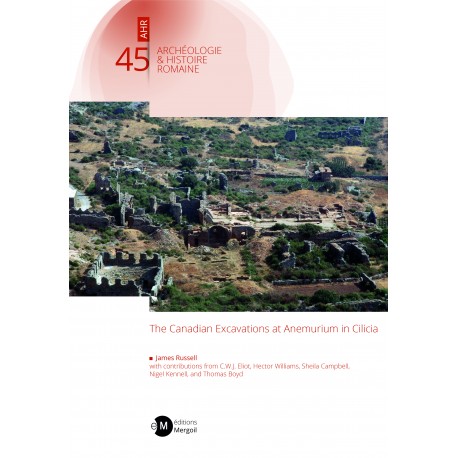 The University of British Columbia carried out excavations and restorations under the direction of Professor James Russell from 1971-1993 at the coastal site of Anemurium in Rough Cilicia opposite Cyprus. Professor Elisabeth Rosenbaum-Alföldi (Turkish Historical Society and then the University of Toronto) directed previous work at the site from 1965-1970. Excavations uncovered a small amount of early Hellenistic coins and pottery but most of the discoveries date from ca. 200-700 CE. There was some resettlement in the 12th-13th centuries CE during the Kingdom of Little Armenia. This volume presents four early Christian churches from the late 5th-6th centuries CE, the city's theatre and well preserved Odeon, the largest and most decorated of over 300 built tombs in the city's necropolis, and a sepulchral inscription. Future volumes will include studies of the coins, the small finds, a large imperial bath/palaestra complex, an adjoining exedral building (possibly a civil basilica), the city walls, and early Byzantine houses. Previous volumes have presented the mosaics (Dr. Sheila Campbell), the mosaic inscriptions (Prof. James Russell) and the Roman and Early Byzantine pottery (Dr. Caroline Williams).
Référence : 53716. Anglais
•
39,00 €
Retour