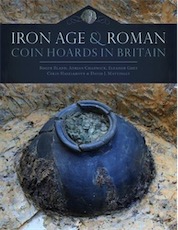 More coin hoards have been recorded from Roman Britain than from any other province of the Empire. This comprehensive and lavishly illustrated volume provides a survey of over 3260 hoards of Iron Age and Roman coins found in England and Wales with a detailed analysis and discussion.Theories of hoarding and deposition and examined, national and regional patterns in the landscape settings of coin hoards presented, together with an analysis of those hoards whose findspots were surveyed and of those hoards found in archaeological excavations. It also includes an unprecedented examination of the containers in which coin hoards were buried and the objects found with them. The patterns of hoarding in Britain from the late 2nd century BC to the 5th century AD are discussed. The volume also provides a survey of Britain in the 3rd century AD, as a peak of over 700 hoards are known from the period from AD 253–296. This has been a particular focus of the project which has been a collaborative research project between the University of Leicester and the British Museum funded by the AHRC. The aim has been to understand the reasons behind the burial and non-recovery of these finds. A comprehensive online database (https://finds.org.uk/database) underpins the project, which also undertook a comprehensive GIS analysis of all the hoards and field surveys of a sample of them.
Référence : 52555. Anglais
•
85,00 €
Retour