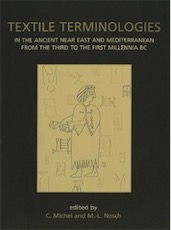 Textile Terminologies in the Ancient Near East and Mediterranean from the Third to the First Millennnia BC, 2013, 326 p. -

Written sources from the ancient Near East and eastern Mediterranean, from the third to the first millennia BC, provide a wealth of terms for textiles. The twenty-two chapters in the present volume offer the first comprehensive survey of this important material, with special attention to evidence for significant interconnections in textile terminology among languages and cultures, across space and time. For example, the Greek word for a long shirt, khiton , ki-to in Linear B, derives from a Semitic root, ktn . But the same root in Akkadian means linen, in Old Assyrian a garment made of wool, and perhaps cotton, in many modern languages. These and numerous other instances underscore the need for detailed studies of both individual cases and the common threads that link them. This example illustrates on the one hand how connected some textiles terms are across time and space, but it also shows how very carefully we must conduct the etymological and terminological enquiry with constantly changing semantics as the common thread. The survey of textile terminologies in 22 chapters presented in this volume demonstrates the interconnections between languages and cultures via textiles.
Référence : 44781. Anglais
•
51,00 €
Retour