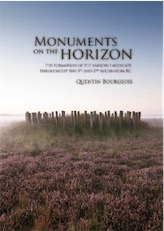 Monuments on the Horizon. The formation of the barrow landscape throughout the 3rd and 2nd millennium BC, 2013, 252 p. -

Barrows, as burial markers, are ubiquitous throughout North-Western Europe. In some regions dense concentrations of monuments form peculiar configurations such as long alignments while in others they are spread out extensively, dotting vast areas with hundreds of mounds. These vast barrow landscapes came about through thousands of years of additions by several successive prehistoric and historic communities. Yet little is known about how these landscapes developed and came about. That is what this research set out to do. By unravelling the histories of specific barrow landscapes in the Low Countries, several distinct activity phases of intense barrow construction could be recognised. Each of these phases contributed in a particular fashion to how the barrow landscape developed and reveals shifting attitudes to these landscape monuments. By creating new monuments in a specific place and in a particular fashion, prehistoric communities purposefully transformed the form and shape of the barrow landscape. Using several GIS-techniques such as a skyline-analysis, this research was able to demonstrate how each barrow then took up a specific (and different) position within such a social landscape. While the majority of the barrows were only visible from relatively close by, specific monuments took up a dominating position, cresting the horizon, and they were visible from much further away. It was argued that these burial mounds remained important landscape monuments on the purple heathlands. They continued to attract attention, and by their visibility ensured to endure in the collective memory of the communities shaping themselves around these monuments.
Référence : 44097. Anglais
•
58,00 €
Retour