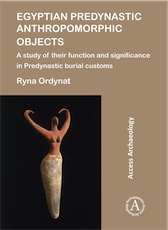 Egyptian Predynastic Anthropomorphic Objects. A study of their function and significance in Predynastic burial customs, 2018, 128 p. -

Anthropomorphic objects from the Egyptian Predynastic have been a topic of frequent study and debate, from the time they were first excavated until today. These objects, including human figurines, hippopotamus tusks, tag amulets and combs carved with the human image, continue to fascinate and perplex scholars today. Objects such as these form part of the extensive and distinctive iconographic imagery of Predynastic Egypt, and are often interpreted solely in the context of their symbolic or iconographic significance. The aim of this study is to examine these anthropomorphic objects in terms of their original context in order to determine what role they played in Predynastic burials - a useful method, as most of these objects are found in graves. A database comprising all provenanced anthropomorphic Predynastic objects and their placement in the grave, in addition to the details of each grave, has been composed in order to conduct a detailed analysis. The analysis is geared to answer the question of whether it is possible to determine the function of these objects from the available data, and if so, what the results could tell us about burial practices and rituals in Predynastic Egypt. It became clear from the results that the context, especially the specific placement of the object in the grave, can reflect significantly the meaning and function of anthropomorphic objects. The placement and function seems to have depended on the type of object: for instance, figurines had different placements and meanings to tusks and tags. Ultimately, it appears that anthropomorphic objects, especially figurines, were personal items with which the deceased were identified and buried by their relations and friends. They may have served as magical or protective items, or as representations of ancestors or the deceased individuals themselves. This conclusion is significant, as it confirms the previous assumptions about the functions of anthropomorphic objects in Predynastic graves through a thorough analysis of available data, making a contribution to our understanding of Predynastic burial rituals.
Référence : 49919. English
•
56,00 €
Retour