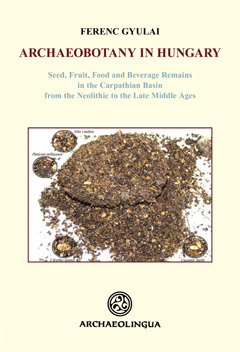 Archaeobotany in Hungary. Seed, Fruit, Food and Beverage Remains in the Carpathian Basin from the Neolithic to the Late Middle Age, 2010, 480 p. -

Thanks to extensive archaeobotanical investigations, it van be now considered as a fact that the Carpathian Basin is one of the longest inhabited regions of Europe. Plant cultivation has a history of eight thousand years, the cultivation of vegetables has been pursued for four thousand years and fruit cultivation has been going on for two thousand years. Cultivated plants arrived in the Carpathian Basin with the first Neolithic agrarian culture. This long-awaited volume presents Hungarian seed and fruit remains with respect to the assumptions that might be drawn regarding plant cultivation. The seed remains also shed light on weed history and the environmental changes taking place in Hungary in the last eight thousand years. The second half of the book is an inventory of all the seed, fruit and food remains that have been unearthed from 350 Hungarian excavation sites in the past 130 years, making the volume an indispensable treasure trove of research data for the interdisciplinary areas of archaeology.
Référence : 40148. English
•
117,00 €
Retour