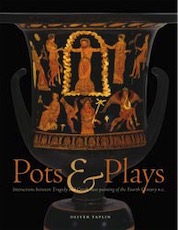 This interdisciplinary study opens up a fascinating interaction between art and theater. It shows how the mythological vase-paintings of fourth-century B.C. Greeks, especially those settled in southern Italy, are more meaningful for those who had seen the myths enacted in the popular new medium of tragedy. The pots do not, it is argued, show the plays as such, but gain depth and complexity from recalling the tragic vision of particular stage-versions, including those of Aeschylus, Sophocles, and, above all, Euripides. Of some 300 relevant vases, 109 are reproduced and accompanied by a picture-by-picture discussion. Nearly half of these were discovered since 1970, and most have not been thoroughly discussed in relation to tragedy before. The vases are organized by playwright and by the tragedy invoked. Apart from its challenging ideas about the significance of Tragedy for the Greeks, this book supplies a rich and unprecedented resource from a neglected treasury of painting.
Référence : 38501. English
•
85,50 €
Retour